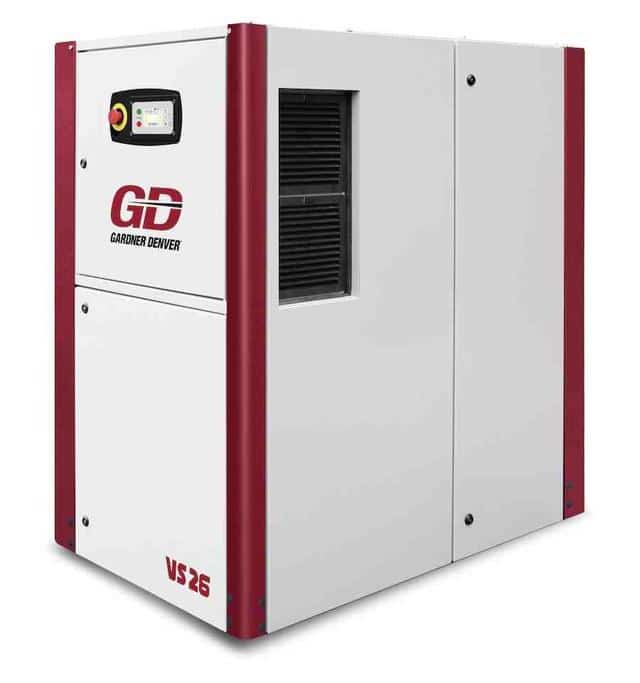 The decision to install either a fixed-speed or variable speed air compressor is a critical one for any industrial business. You might have some idea of the overall air compressor requirements that your facility needs for peak production. But when it comes to evaluating the cost differences and benefits of a fixed vs variable-speed compressor, it’s worth considering your options.

What Is a Fixed-Speed Air Compressor?

True to their name, fix-speed air compressors operate by sending a supply of constant, or fixed, voltage to the motor, which drives the rotary screws at a consistent speed to pull in and pressurize air. As a fixed-speed compressor, your machine is always operating at full throttle, even when the load being placed on it is minimal.

With this type of compressor, the pressure in the storage tank gets smaller as the compressed air gets depleted. When that pressure reaches a set value, the motor runs again to drive more air into the tank. This frequent stopping and starting of the motor can use a lot of energy.

What Is a Variable-Speed Air Compressor?

Variable-speed rotary screw air compressors, also called variable speed drive compressors, use an intelligent drive system to constantly alter the motor speed to match the air demand. The speed of the unit will fluctuate to line up with the output that is required of the system.

The Advantages of Variable-Speed Air Compressors

Traditional air compressors are fixed speed, meaning they run at a constant speed no matter the output required. This puts a lot of load and pressure on your motor. If you aren’t using that much compressed air, there might be a better option. Here are some of the advantages of choosing a variable-speed air compressor instead.

Variable-speed air compressors have lower starting currents. When a fixed-speed compressor turns on, you’ll see large spikes in energy demand. In fact, you can see an inrush current surge as high as 600% of the regular operating current.

In contrast, a VSD compressor employs a “soft” start/stop that reduces or eliminates these energy surges. The acceleration and declaration of power are reduced, which lowers amperage peaks. Some power companies are issuing penalties for large amperage surges, so startup surges are a vital consideration.

As you can see, the amount of energy you will save is one of the biggest advantages of choosing a variable-speed air compressor. A fixed-speed compressor not only has a bigger startup surge, but it is also going to draw the same amount of energy no matter the compressed air output demand.

A variable-speed machine will lower its RPMs when less output is needed and ramp them up when more is required. This will reduce energy consumption greatly which will increase savings. In some cases, industrial plants see their energy costs drop more than 50% by switching the type of compressor they use.

But variable-speed air compressors operate with more stringent tolerances because they use electronic controls. These only allow for variations of about 1.5 PSI, giving your plant more consistent pressure.

Because fixed-speed compressors are running at full speed all the time, they are going to be under much more stress than a VSD compressor. This type of compressor may require more frequent maintenance, and its useful life may not be as long as that of a VSD compressor.

When to Use a Variable-Speed or Fixed-Speed Air Compressor

Variable-speed air compressors might have many advantages. But they aren’t necessarily the right choice for every business. The variability in your processes and the way you use compressed air will help guide your choices.

In some facilities, the best option is to use a combination of fixed and variable-speed air compressors. If you are running both types of compressors, the variable-speed compressor might be your primary machine that can make adjustments according to your volume requirements.

This can help you save energy. When your output demands are greater than the variable machine can handle easily, your fixed-speed air compressor can go to work at full capacity while the VSD machine continues to handle fluctuations to meet your overall demand.

Whichever option you choose, it’s never a good idea to make your selection based on the initial cost of the machines. When you look at the energy savings of using a variable speed versus a fixed-speed compressor, you’ll understand that you will save money over time. Further, some businesses might qualify for tax incentives or energy savings programs by installing a variable-speed air compressor.

Contact C&B Equipment for All Your Industrial Compressor Needs

If you’re having compressor issues, we can help with that as well. Our service team is factory trained and certified in preventative maintenance, troubleshooting, and repair. Contact us today and let us know how we can help your business.