C&B Equipment recently sold the region’s first Direct Inline Pump System, also known as the DIP System, to the State of Kansas for a correctional facility in Norton, Kansas.

The wastewater pumping system, expected to be installed in March, was developed by French innovator, Stephane Dumonceaux. Since the first DIP System® was patented, installed and proven successful back in 2003, more than 1,300 systems have been purchased by municipalities throughout France, including Disneyland Paris, with many more expected to come. 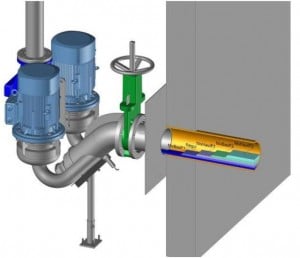 Why is this system so important? City sewer lines and pumps are notorious for collecting all sorts of trash and debris such as wipes, rags, diapers and even thick materials like jeans — all of which clog pumps and need to be physically removed.

These problems can lead to costly issues for municipalities, problems that up until the advent of the DIP system, municipalities were forced to shovel up the cash to repair.

DIP shreds through solid and fibrous bodies effortlessly, allowing for uninterrupted flow through the system. This incredible reliability is an undeniable asset as it saves substantial time and dollars for municipalities. That’s what we at C&B like to call Uptime Solutioneering™!

How does it work? By lifting gravity effluent directly at the point of entry, without water loading or a wet well, the DIP System overcomes the drawbacks of retained volumes of effluent.

Problems caused by the retained volumes of effluent often include:

C&B’s consistent expertise and attention to engineering and design results in greater equipment uptime and performance in the field. This is what Uptime Solutioneering™ brings to our customers.

Get a Free Quote